The Auriga is the first chronograph model under Tangramatic and uses the Seiko cal.VK64 movement that has two sub dials and a sweep timer seconds. Not only that, it features mechanical pusher action hence the term meca-quartz. I've designed the Auriga initially as a homage to vintage chronographs but as it turns out, design direction can change throughout the course of its making. 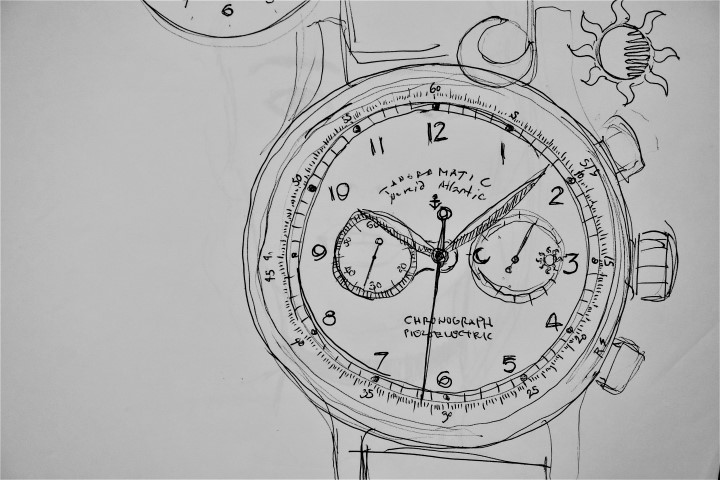 How it started. The first sketches I made was actually the chronograph version of the Nereid, put it simply, it's a marine chronograph. I've also played around with naming it Oceanid, just so there's some distinction. Shortly afterwards, I didn't think it was distinctive enough. It still was a Nereid chronograph.

I had many other ideas in the sketch phase and consided an Argo-type (Bauhaus) chronograph and the vintage ones that were produced between the 1940s-60s. There were tons of vintage chronos in those decades: Angelus, Gallet, Elgin, Helbros, even Tissot. I love the complex dial layouts of these, having a spiral shaped tachymeter in the inner area and the telemeter near the dial edge. Strangely enough, those also are the very same details I think could use some improvement. More on that shortly.

As expected of a vintage timepiece, these come in 38mm case sizes mostly. In our case, we have to stick with 42mm which is considered a contemporary size. Let's jump to 3D. 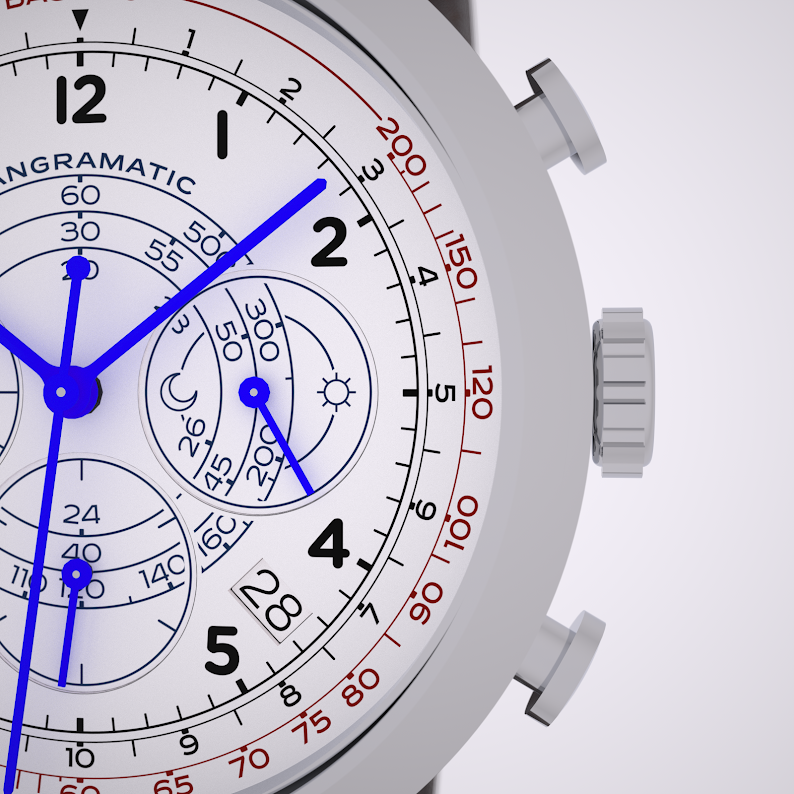 Fast forward to the renders. As you can see this is a homage to those vintage chronographs but it's somewhat simpler. I've removed details like milliseconds and had lesser divisions on the telemeter. I've played with both the bicompax and three dial configurations and favored the former because it makes the dial look more symmetrical and less busy. The trade off would be losing the running seconds. Then again, the aim was a more elegant sport watch. Less moving things on the face mean less things to think about and thus more elegant.

Then backtracking a little. Before I got to the 3D renders, I did take a lot of time just composing the dial details. I don't use any Adobe tools and merely free ones like Inkscape and Gimp. I honestly think I am some kind of abomination to the rest of designers everywhere. Then again, I am not one by profession. The most difficult part to do was the spiral tachymeter. Inkscape has the ability to make spirals and I was able to figure out the right calculation to make a good looking one but putting in the numeral markings was a whole new ball game. I only knew how to align typography in a circular direction but not in a continuously spiral-oriented angle. If that doesn't make sense then it's probably one more reason I ditched this design -- it sounded as complex as it was to implement it.

So I opted to just have concentric circles to ease the challenge. And yet I still wasn't satisfied. 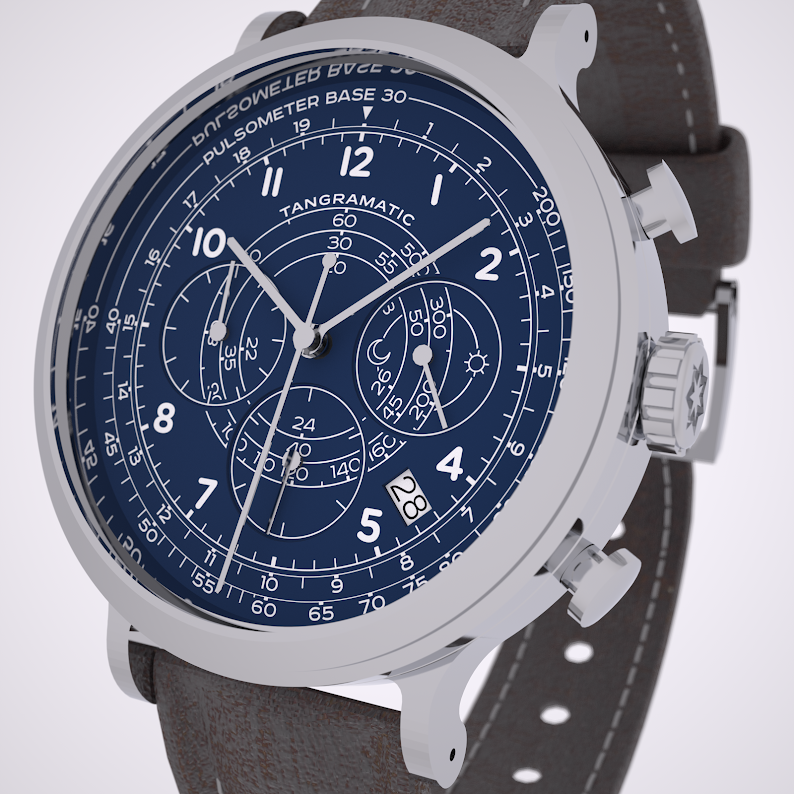 At this point, it's not even looking like Auriga yet doesn't it? Even the case is based off of the Nereid with its curved lugs.

The branching point. I have a tendency to make variations of the same model with inconsistent dial designs. In my head, I had three dial types:

I wanted to get off of this way of thinking and choose just one theme and revisit the other types later, if ever. Before we go on, here's the Bauhaus version. 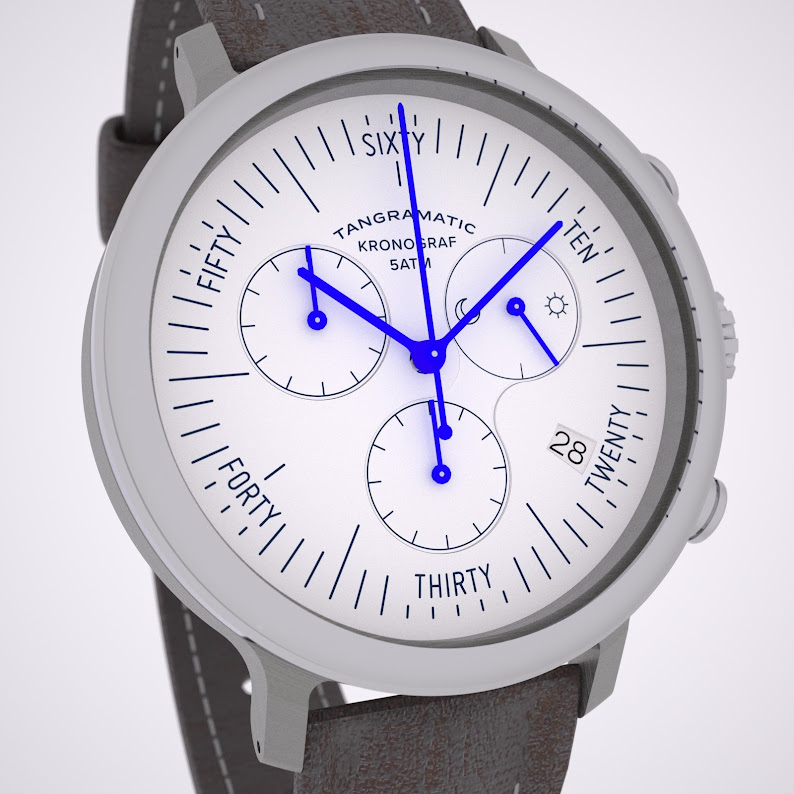 As you can see, it's very reminiscent of our Argo. The Bauhaus style doesn't really fit the sporty/elegant concept so I decided to have it as a separate future model. That leaves us with the vintage and marine versions. The marine chronograph never did have a 3D render so it was easy for me to drop it.

Side note: 'Kronograf' is the Norweigan translation of chronograph.

Now I only have the vintage type in my sights. I then played around with even more variations of it. Good thing one stood out of it all. 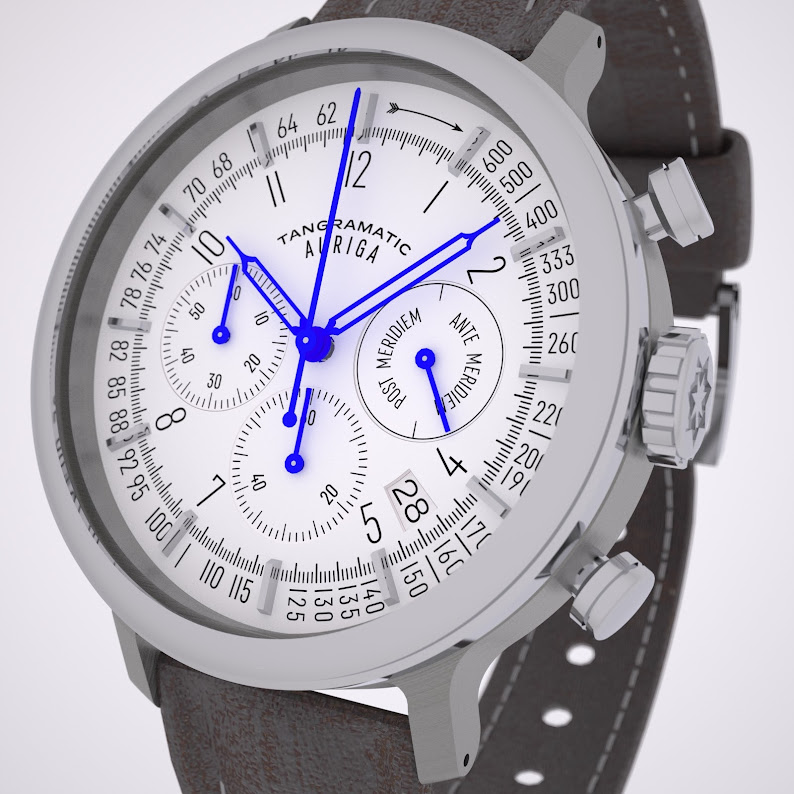 Now we're looking more and more like the present Auriga. Not only that, it's unique more or less. It still has some Bauhaus influences, what with the sans serif type faces and radial composition and all.

The 24-hour sub dial. By now you may have noticed that I didn't put hour details in the right sub dial. That's because I think it doesn't serve much purpose as it moves in conjunction with the central hour hand. If it didn't, it would be much more useful. Since it's not, I wanted to make it simpler and turn it into an AM/PM indicator instead.

The racing vibe. Now that I had the design language pinned down, it's time to put in flavor and have it stick to a more cohesive theme. The white dial already looks a bit sporty but I need options. So it struck me. Why not a racing theme or at least motoring inspired? Watches and cars go hand in hand and I do have more than average interest for automobiles. With that thought, I then got myself busy with capturing the spirit of the race into the watches. The original white face is now officially the base model and it's time to work on the siblings.

The need for speed. Now to experiment with colors. The Gulf theme is just begging to be included, the main influence being Steve McQueen's Ford GT40 in the 1968 movie Le Mans. Special thanks to Stephan and Kyle for pointing out the nuances in using this color combination. 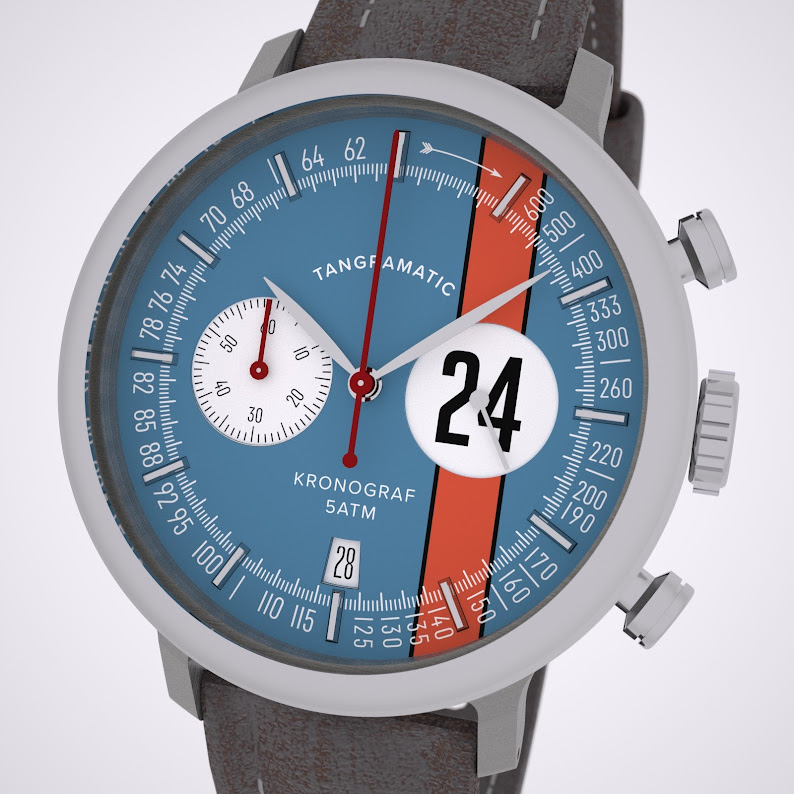 I do get sidetracked sometimes and put in colors that are just silly like the Delorean Auriga. Also, the VK68 movement is just a really nifty dial configuration but I really have to stick with the VK64. 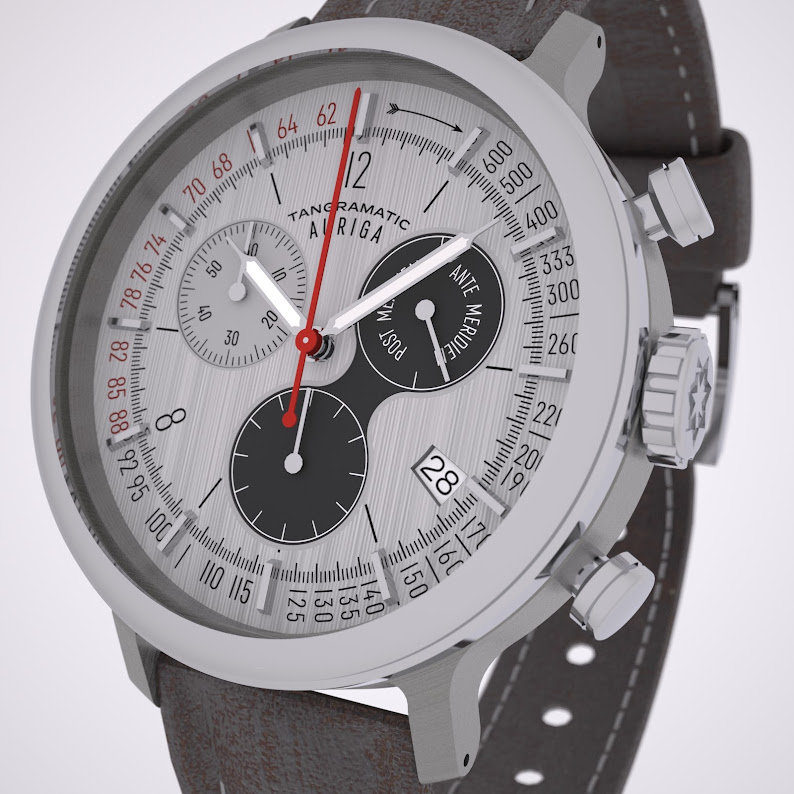 Now then. What else?

The custom case. Weeks later, after thinking I was finished with Auriga, I decided not to use the conventional round case. There's really just one reason for me to do such a thing. And that is challenge. I wanted the Auriga to also be the starting point of expanding my skills further to not just dial design but to case design as well.

The new case shape of choice was easily the barrel type used by other race-inspired chronographs. Going a bit further, I don't think I'd want to directly copy what's already done before.

I ended up with the case design below. The lugs are shaped something like the crankshaft of a compression engine. 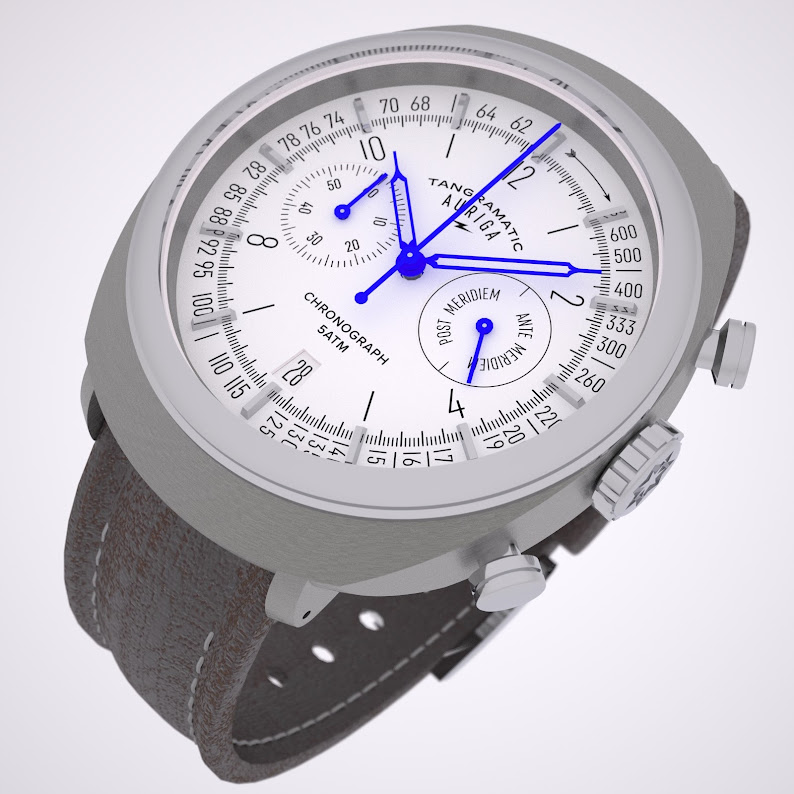 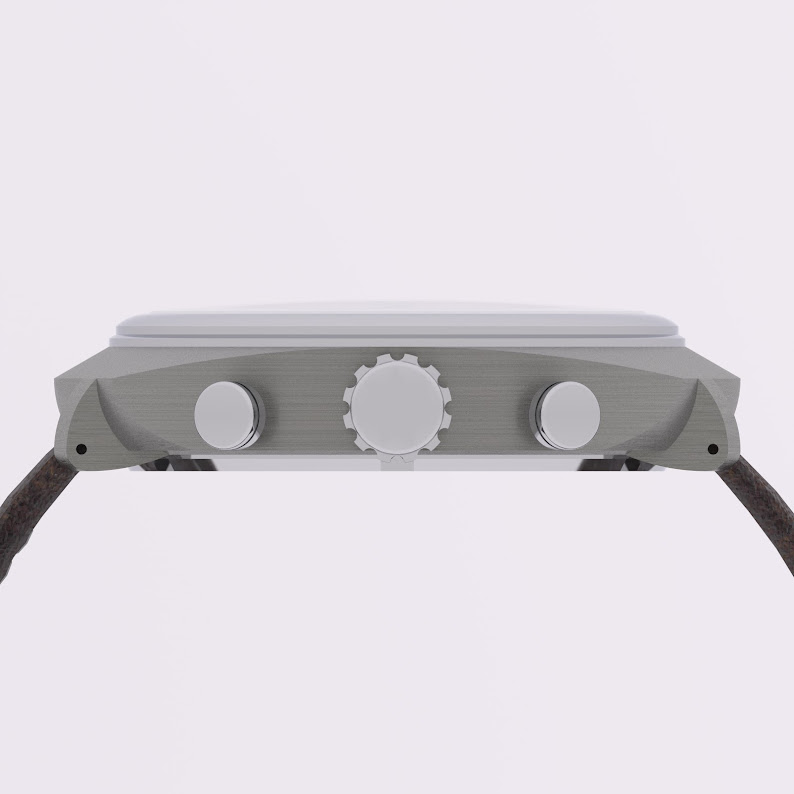 And before I forget, a view of the caseback which didn't change much since the first design iteration. 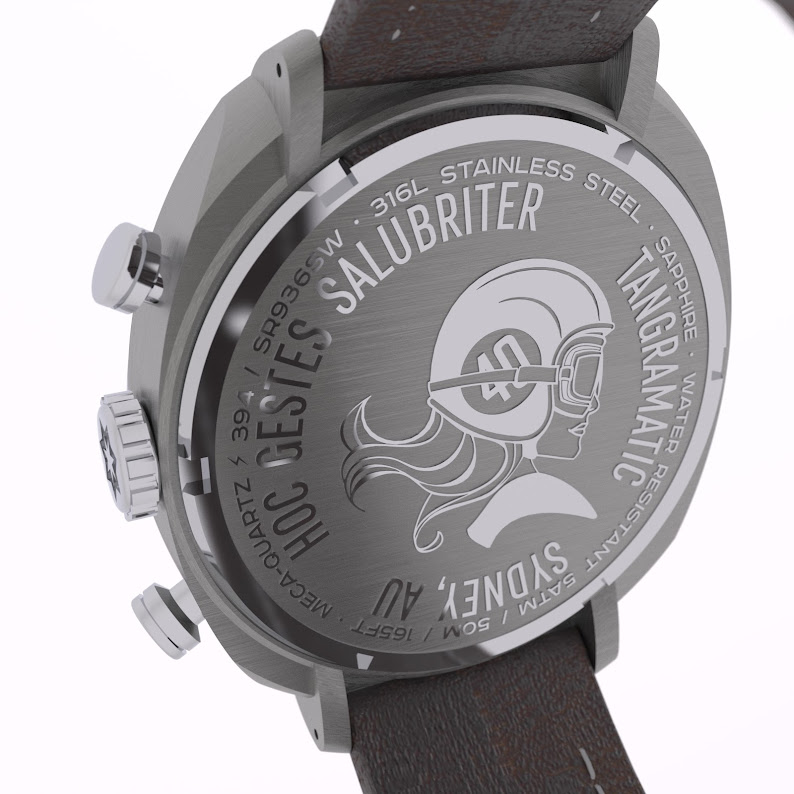 I try to put in useful information about the watch in the caseback including what type of battery you need to use should you need to replace it. As for the artwork, I have a tendency to use female inspirations (Nereid, Oceanid, etc.) so I decided on a lady race car driver with a vintage helmet. The number 40 on the helmet isn't an especially symbolic number. It's the number printed on the side of the Ford GT40 that sold for $11 million that was previously owned by Steve McQueen.

And before we end this blog entry, here's the third color variation in British racing green. 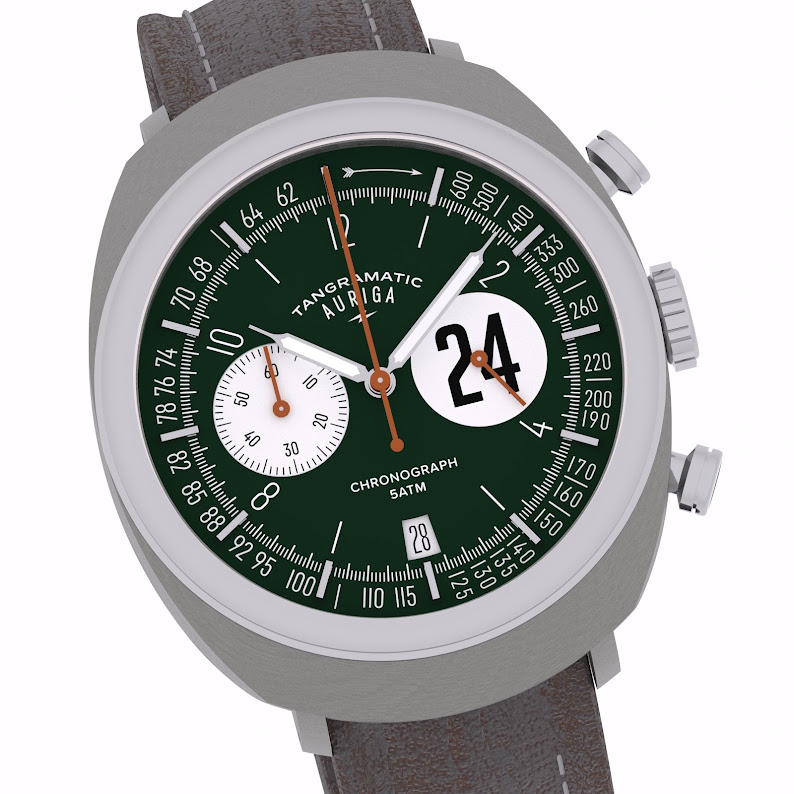 Since these are all renders, the actual physical prototypes may differ in some way. But for now let's hope they come out nicely. Part two would be up when we do get the prototypes and snapped some nice pictures.

If you liked the story and you're interested to get involved with the pre-orders, do sign up for the newsletters. Cheers!